Clogau - The Gold of Royalty

Welsh Gold - The world rarest and sought after

In 1911, at the investiture of Prince Edward of Wales at Caernarfon Castle, the regalia used (which consisted of a coronet, a rod, a ring, a sword and a robe or mantle with doublet and sash) incorporated pure Welsh gold, identified by the Welsh dragon stamp. The regalia were later re-used at Prince Charles's investiture at Caernarfon Castle, in 1969.

Some members of the British Royal Family have used pure Welsh gold to create their wedding rings, since 1923. This tradition was founded by The Queen Mother, then Lady Elizabeth Bowes-Lyon, on her marriage to the Duke of York on 26th April, 1923.

Other members of the Royal Family that have had Welsh gold wedding rings include:

Her Majesty Queen Elizabeth's very own wedding ring, from her marriage to The Duke of Edinburgh on 20th November 1947, is crafted from a nugget of pure Welsh gold from the Clogau St. David's gold mine.

The tradition of the British Royal Family using Welsh gold wedding rings was carried into its 95th year during the most recent royal wedding of Their Royal Highnesses, The Duke and Duchess of Sussex on 19th May, 2018.

Rare Welsh gold is contained within each piece of Clogau jewellery, making it some of the most exclusive jewellery in the world. The content of Welsh gold can be identified by the Welsh dragon stamp, and other unique marks that denote a genuine piece of Clogau.

Where does Welsh gold come from?

One area is in North Wales in a band stretching from Barmouth past Dolgellau and up towards Snowdonia. This was mined at several mines, the largest of which were the Gwynfynydd Gold Mine near Ganllwyd and the Clogau Gold Mine near Bontddu.

In South Wales it is found in a small area in the valley of the River Cothi at Dolaucothi where it is known to have been mined by the Romans.

Jewellery such as torcs were worn by early Welsh princes. 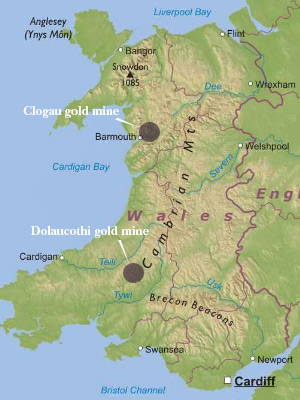